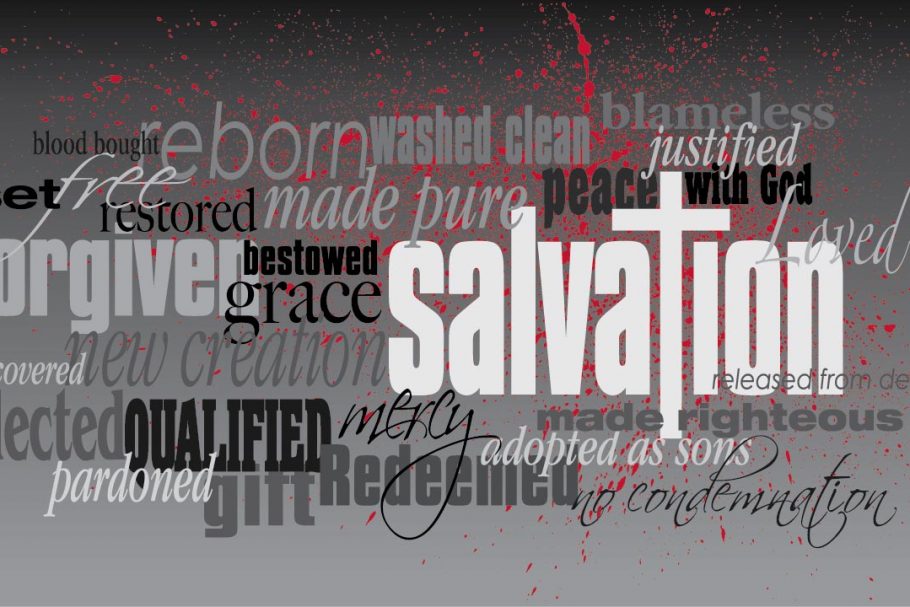 Salvation! Do you have it?

The biblical definition of salvation in the Old Testament is deliverance, victory, prosperity, health, help (-ing), save, saving (health), welfare.  The Hebrew word is yeshuwah (yesh-oo-aw) which happens to be the name of Jesus.  Jesus is our salvation.  Jesus the Christ means Savior the Anointed.

The definition of salvation in the New Testament is soteria (so-tay-ree-ah) meaning rescue or safety: deliver, health, salvation, save, saving.

You might say why do I need salvation,  well, let me explain…

Then God said, “Let Us make man in Our image, according to Our likeness;… God created man in His own image, in the image of God He created him; male and female He created them (Gen 1:26,27). Then the Lord God formed man of dust from the ground, and breathed into his nostrils the breath of life; and man became a living being (Gen 2:7). The word breath in Hebrew is nesh-a-ma meaning spirit, a puff (i.e. of wind), divine inspiration, soul, Spirit of GOD. The Hebrew word for life is alive, raw (as raw flesh). When God made man out of the dust of the ground he was just living raw flesh like the other animals created. Then God breathed (puff, sniff at, blow) into his nostril the Spirit of God and man became the son of God. Man became eternal. The spirit of man is the Spirit of God. The flesh of man is just a container for the spirit of man. We are a three part being, spirit, soul, and body (flesh).

God told Adam he could eat of any tree of the garden except one. Now think about that, he had everything but wanted more. God had no choice but to declare sentence. why? because He already said it in Genesis 2:16,17.  “And the Lord God commanded the man, saying, “Of every tree of the garden you may freely eat; but of the tree of the knowledge of good and evil you shall not eat, for in the day that you eat of it you shall surely die.” The Word says that God cannot lie, if He said it, its a done deal.  “In hope of eternal life, which God, that cannot lie, promised before the world began; ” (Titus 1:2).  Forever, O Lord , Your word is settled in heaven (Psalms 119:89). The grass withers, the flower fades, But the word of our God stands forever.” (Isaiah 40:8) “All flesh is as grass, And all the glory of man as the flower of the grass. The grass withers, And its flower falls away, But the word of the Lord endures forever.” Now this is the word which by the gospel was preached to you (I Peter 1:24-25).

Now since man fell God had to find a way to redeem him, because if God didn’t redeem man he would spend eternity separated from God. God started the steps to redeem man. Since man had sin, there needed to be away to remove that sin or cover it. God cannot look upon sin because He is a holy God. From the moment that Adam sin God had a plan. In Genesis 3:15 God said the seed of the woman would bruise the head of the serpent. Until that day arrive there had to be a way for man to approach God. The shedding of blood is the only way that one can remit their sin. For the life of the flesh is in the blood: and I have given it to you upon the altar to make an atonement for your souls: for it is the blood that maketh an atonement for the soul.

Each year there had to be a sacrifice (the shedding of blood) for the sins of the people. And Aaron shall make atonement upon its horns once a year with the blood of the sin offering of atonement; once a year he shall make atonement upon it throughout your generations. It is most holy to the Lord.” (Exodus 30:10). The sacrifice of animals was only good enough to cover our sin, but not able to purge it for good. But into the second part the high priest went alone once a year, not without blood, which he offered for himself and for the people’s sins committed in ignorance; the Holy Spirit indicating this, that the way into the Holiest of All was not yet made manifest while the first tabernacle was still standing. It was symbolic for the present time in which both gifts and sacrifices are offered which cannot make him who performed the service perfect in regard to the conscience— concerned only with foods and drinks, various washings, and fleshly ordinances imposed until the time of reformation. But Christ came as High Priest of the good things to come, with the greater and more perfect tabernacle not made with hands, that is, not of this creation. Not with the blood of goats and calves, but with His own blood He entered the Most Holy Place once for all, having obtained eternal redemption. For if the blood of bulls and goats and the ashes of a heifer, sprinkling the unclean, sanctifies for the purifying of the flesh, how much more shall the blood of Christ, who through the eternal Spirit offered Himself without spot to God, cleanse your conscience from dead works to serve the living God? And for this reason He is the Mediator of the new covenant, by means of death, for the redemption of the transgressions under the first covenant, that those who are called may receive the promise of the eternal inheritance.

For where there is a testament, there must also of necessity be the death of the testator. For a testament is in force after men are dead, since it has no power at all while the testator lives. Therefore not even the first covenant was dedicated without blood. For when Moses had spoken every precept to all the people according to the law, he took the blood of calves and goats, with water, scarlet wool, and hyssop, and sprinkled both the book itself and all the people, saying, “This is the blood of the covenant which God has commanded you.” Then likewise he sprinkled with blood both the tabernacle and all the vessels of the ministry. And according to the law almost all things are purified with blood, and without shedding of blood there is no remission.

Therefore it was necessary that the copies of the things in the heavens should be purified with these, but the heavenly things themselves with better sacrifices than these. For Christ has not entered the holy places made with hands, which are copies of the true, but into heaven itself, now to appear in the presence of God for us; not that He should offer Himself often, as the high priest enters the Most Holy Place every year with blood of another— He then would have had to suffer often since the foundation of the world; but now, once at the end of the ages, He has appeared to put away sin by the sacrifice of Himself. And as it is appointed for men to die once, but after this the judgment, so Christ was offered once to bear the sins of many. To those who eagerly wait for Him He will appear a second time, apart from sin, for salvation.

If you do not make a willful decision to accept Christ you will continue to be spiritually dead which is separation from God. Jesus has paid the ultimate price so that you can have eternal life. There is nothing you can do to work your way into heaven. You must accept the gift of God.
Jesus said to him, “I am the way, the truth, and the life. No one comes to the Father except through Me. “Neither is there salvation in any other: for there is none other name under heaven given among men, whereby we must be saved” (Acts 4:12).

Romans 10:9-13 says “that if you confess with your mouth the Lord Jesus and believe in your heart that God has raised Him from the dead, you will be saved. For with the heart one believes unto righteousness, and with the mouth confession is made unto salvation. For the Scripture says, “Whoever believes on Him will not be put to shame.” For there is no distinction between Jew and Greek, for the same Lord over all is rich to all who call upon Him. For “whoever calls on the name of the Lord shall be saved.”

Father I believe in my heart that you raised Jesus from the dead and I confess with my mouth right now that Jesus is Lord. You said if I do this I will be saved. I thank you Father for saving me. I thank you for salvation.

That’s it.  You are now a new creation in Christ Jesus. If any man be in Christ, he is a new creation: old things are passed away; behold all things become new (II Cor 5:17) Start reading your bible and find a good bible believing church that teaches the Word of God. Send us email and let us know you have accepted Christ and we will send you some information on how to grow in Christ. We will also give you information on churches to attend in your area.